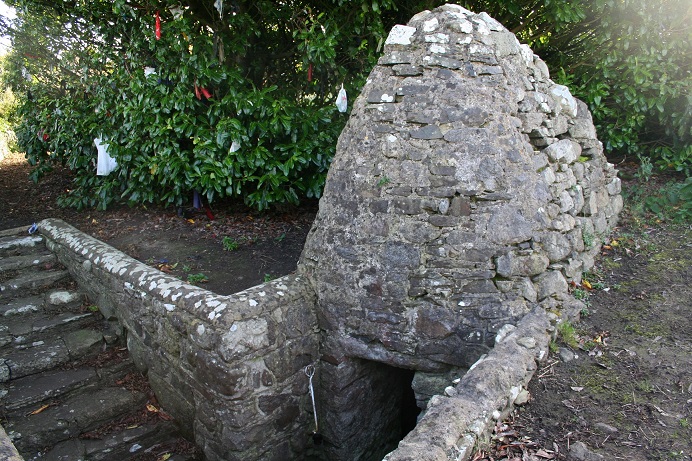 Faughart near Dundalk Co Louth is an ancient place filled with a history that is both gentle and fierce. It is a place associated with battles, boundaries and travel. The Sli Midhluachra, one of the 5 ancient roads of Ireland, runs through the hill of Faughart on its way from the Hill of Tara to Armagh and then to the north coast of Ireland, making it an strategically important place.

However, Faughart is also a place of deep peace, tranquillity, beauty and healing, being associated from ancient times with Brigid, Pre-Christian Goddess and Christian Saint. Brigid holds the energy of the Divine Feminine within the Celtic Spiritual tradition. The mystical woman St. Moneena was also associated with Faughart before she moved to the quieter place near Kileevy, Co Armagh, where she created her monastery. So over the centuries, Faughart has been a place where the polarities of inner and outer life, battles and prayers have been experienced. For the people in Louth, Monaghan, and Armagh and Down, Faughart is the place associated with Brigid, the compassionate woman who heals, advises and nurtures all who come to her in times of need. People are drawn to her shrine at Faughart because of the deep peace they experience there. Brigids peaceful presence can be experienced in this landscape where the ancient beech trees radiate old knowledge and hold a compassionate space for us all.

People, of all ages and from all walks of life, come to Faughart throughout the year to honour and pray to Brigid. However on La feile Bhride (Feb 1st) people come in their multitudes! On this special day the shrine at Faughart is thronged with pilgrims who come to invoke Brigid’s blessing on their emerging lives. Brigid is associated with springtime and new life emerging she is the one who “breathes life into the mouth of dead winter.”

As a child growing up in Cavan, I never heard about Brigid of Faughart or knew about the traditions associated with her feast day. Somehow I was destined to meet her. I moved to Dundalk in 1972 for a year and apart from some years in Canada, California and Sligo, have been here since. I first went to Faughart in 1992 and was amazed by the beautiful energy present there. At that time, I had begun to study the Celtic spiritual tradition, something from which I and so many other people had been disconnected from over many centuries. My quest at that time and since then has been to recover some of the riches and wisdom of that ancient tradition. And to ask the question “ How could this wisdom be integrated into the lives of us modern humans in ways which would create a more balanced and peaceful life for all of the beings on planet Earth”?

While at Faughart in 1992 something deep and ancient stirred in my heart and I have been on a journey with Brigid ever since. In 1993 I went to The Brigid Festival in Kildare, organised by Mary Minehan, Phil, KEE and Rita Minehan (Solas Bhride) At this festival these women, in a daring Brigid-like action, re-kindled the flame of Brigid in Kildare. The flame of Brigid had been quenched at the time of the suppressions of the monasteries around the 12th century. As this took place an ancient part of my soul understood the significance of this prophetic act. My journey into the Celtic spiritual tradition changed and evolved over time, becoming a deeply significant part of my life’s purpose. As I journeyed deeper into this ancient tradition, I discovered that Brigid, in both her Goddess and Christian saint manifestations, embodied the Divine Feminine within the Celtic Spiritual tradition.

Brigid was a formidable woman who dedicated herself to serving God and following the Divine will for her life. From an early age, she had a very clear vision of her life’s mission. Her great inner strength supported her to follow her truth, even if that went against her family wishes. As a child and a young woman, Brigid constantly challenged the accepted norms of her society, especially those expressed by her father if they opposed her own values. This reflects Brigid as a person who lives her life from a place of deep inner knowing and inner authority.She refused to marry the suitors that her father arranged for her, because she had chosen a different life path and destiny. She was never willing to compromise her soul journey!

Brigid’s legendary generosity is related in the numerous stories about her giving away food and clothes to people who came to her monastery or whom she met along the way. This generosity was, it seems, based on her absolute faith in the abundance of the universe to provide all that was needed in each moment. Each time she gave away the butter or meat needed for the next meal it miraculously reappeared in time for that meal!

Brigid had the capacity to bring forth new life, to nourish, to create plenty in the crops or an abundance of the milk from cows, and to manifest or create ex nihilo. This gift reflected the true abundance and prosperity that was present in the society she created, a society living in right relationship with the land. Her life and work thrived due to her deep trust in life and because there was a total absence of fear within her.

It is said that from the moment Brigid learned to know God that her mind remained ever focused on God/Divine. This allowed her remain connected to God and the heavens while living on the earthly plane. Her great power of manifestation was a result of this ability to be aligned heaven to earth. The strong connection between her inner and outer worlds allowed her to focus her energy onto a particular intention so clearly as to ensure its manifestation in the physical world.

The story how Brigid got the land for her monastery in Kildare is a wonderful example of her ability to manifest what she needs. She asks the local lord for land stating clearly what she needs .He refused at first but she is not deterred by this. She pursues her request in a different way by asking “Give me what land my mantle will cover” He says Yes OK! When she placed the mantle on the ground it grew until it covered enough land for the monastery. And he being bound by his word must give her the land!! In this story we encounter a woman who can hold her intention clearly, even when, on the surface, it seems that her request will not be met!!

Slowly, I began to understand that Brigid, the Pre-Christian Goddess and Celtic Christian saint who lived in the 5th Century in Faughart and Kildare, who embodied wonderful qualities of compassion, courage, independence and spiritual strength was not only a historical figure! I realised that those energies and qualities exemplified by her in her lifetime are still alive in the world and available to me and to all humanity. What a gift it was to realise this! And so the task became how could I access those qualities in myself, embrace them and use them to challenge the dominant thinking of our culture and become like Brigid, a catalyst for change in society. The qualities reflected in these stories are the ones with which Brigid challenged the dominant thought patterns of her time.

As my own relationship with Brigid evolved from a nostalgic admiration of her as saint to an understanding that the qualities she embodied are present, but dormant within me, something else changed . I realised that the best way for me to honour Brigid is to embrace and live those qualities, recalled in the stories about Brigid‘s life, that are still a source of inspiration 1500 years after her death. And to realise that I and each of us will do that in our unique way and in the particular circumstances of our lives. This is the only way in which her gift and her love will become really present in the world today.

Brigid challenges each of us to have that same courage; to live our lives with the passion and commitment that comes from trusting our own inner truth and living the integrity of our unique soul journey. She invites us; to like her, breathe life into the mouth of dead winter everywhere we find it in ourselves and in our society. She represents for me the spiritual warrior energy reflected in this ancient triad “The eye to see what is, the heart to feel what is, and the courage that dares to follow”

Of a Thousand Years by Anne Powell

The Giving by Frances Cotter