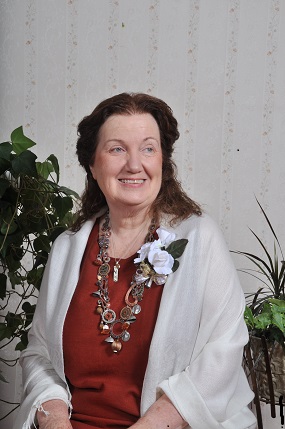 Since 2005, Anne Kathleen has been a student of Jean Houston, whose guidance and mentoring have led her to envision a spirituality that is in harmony with our new understandings of the universe while drawing from the mystical heart of ancient spiritual beliefs and practices. Through workshops and plays based on ancient stories as well as on the writings of medieval and modern-day women mystics and the recent discoveries of physicists, Anne Kathleen assists people to discover the pattern of the Sacred woven into the tapestry of their everyday lives.

Since 2013, Anne Kathleen has been performing “The Wooing of the Soul”, her ninety-minute one-woman play based on an ancient Celtic Tale,set on Tara Hill in Ireland.

Over the past twenty-five years,Anne Kathleen has offered, in Canada, the U.S., Ireland, and in Norwich itself, over eighty performances of the ninety-minute, one-woman play Julian by James Janda, based on the life and writings of the 14th Century English Mystic, Julian of Norwich.

Her novels A Place Called Morning (2001)Planted in the Sky(2006) and Called to Egypt on the Back of the Wind(2013) are published by Borealis Press.www.borealispress.com

A member of the Community of the Grey Sisters in Pembroke, Ontario, Canada,Anne Kathleen holds a Master’s degree in Religious Communication /Pastoral Studies from Loyola University in Chicago.